Four years on from Shriek, Baltimore-formed duo Wye Oak are back with a sophisticated fifth album, packed with expansive and intricate arrangements. Here, singer Jenn explains how creative distance, anxiety and embracing limitations informed The Louder I Call, The Faster It Runs. 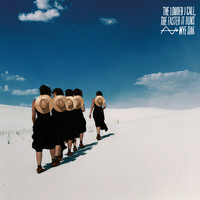 It feels like you’ve not stopped since releasing Shriek in 2014, what with you releasing a solo album and Andy touring with EL VY. Did you need to take time out from Wye Oak, or are you just comfortable working separately?

I think it’s a little of both. Andy and I are both the kind of people that love being creative and collaborating. I see no point in limiting ourselves to only being able to work with each other and I think that, just with any relationship, allowing yourself the space and the freedom to have outside influences can be really invigorating. So it’s just an important part of who we are. We love to expand our skill sets and to be creative as much as possible, so it only makes us more excited about working together.

So Andy’s got a solo record that he’s working on, and he toured with EL VY and with Lambchop for the bulk of 2017, and I’ve been working on producing records for other people in addition to my own. I actually just finished producing a record, which is not out yet, from an amazing woman named Madeline Kenney. She’s from the Bay area, from Oakland, and she’s phenomenal.

How have those separate projects fed into Wye Oak, creatively?

I think that everything that Andy and I have learned makes us better at realizing our ideas with more complexity and nuance. You know, we started doing this when we were really young so there’s always been a learning curve in terms of how we figure out between the two of us how to bring these ideas to life. And to a certain extent, like with everyone, you end up settling for something that’s more a combination of your original idea and whatever happy accidents happened along the way. But something that’s really satisfying is getting closer and closer to being able to actually realize your ideas as you’ve conceived them, and that just requires skill. And the only way to acquire skill is through practice and through experience.

Our intentions are so good, but the world is always corrupted by our inherently flawed nature.

When did you begin work on The Louder I Call, The Faster It Runs, and what was your starting point?

I guess it took from Fall 2016 to September 2017, so the whole turnaround was actually pretty quick. I remember we had a conversation about whether we wanted to make a new record in the first place, and that was a choice that we were both excited to make.

Generally speaking, our records and the concept of our band as a whole tends to lean towards seizing upon some sort of limitation and using it to be creatively-inspired. For example, the duo feature of our band was a limitation that we used as a starting point for our earlier material. And then when we made Shriek, the idea was that we would limit ourselves to not using guitar – the instrument that I was most comfortable writing with. And this time we decided that it would be interesting to see what would happen if we didn’t make any rules for ourselves, which in some ways is more challenging because it’s a total creative blank slate. But it’s also really exciting.

The arrangements are a lot more sophisticated and expansive than Shriek. Tell us about that.

Well, that’s great to hear, thank you. I can’t really point to anything that we were trying to emulate but you know I think that I’m drawn to rhythmic complexity. There are a lot of songs in odd time signatures, using an anchor of repetitive, interlocking rhythms, and then writing contrapuntal melodies over the top of that. I like when things play off of one another but don’t necessarily imitate one another. For example, with drum parts I tend to think of them in a more linear, melodic sense, probably because I’m not a trained drummer. And a linear drum part is a part where you’re not necessarily just playing any one drum hit at the same time as any other, so it’s more fluid and more melodic. I think we were both trying to make something that really felt like it embodied all of our influences at once.

The arrangement on “Symmetry” evokes a feverish feeling, as does the album title. Were you looking to conjure a sense of panic?

Oh absolutely. Panic is definitely a great word to settle on. This record to me sounds like I’m competing with a constant sense of anxiety and dread. I feel like I’ve always had an edge of anxiety to my personality... But in the past few years because of biology and also because of the events of the world around us – and probably in no small part due to our awareness of those events being increased as never before – that anxiety has been increasing exponentially. More and more, music is the thing that I use to work through anxiety and learn how to self-soothe and find some sort of anchor in all of it. But, in short, yes, I think an anxious, panicked energy is a big part of what’s driving these songs.

Where did the inspiration for the album title come from?

We are always looking for an ambiguity to the titles that we choose and generally speaking, we’ve always chosen titles that were pretty short. This one is interesting to me because when I was conceiving of it in my mind it was, “I’m trapped and I’m running from something, but the more I call for help the more what I’m running from will find me.” And then I pitched it to Andy and he was like, “Oh, so you mean it’s like the more I want something and the harder I try to get it the farther it moves away from me?” And I realized that idea was the perfect psychological litmus test for the person who’s hearing it and how they react to it.

On “It Was Not Natural” you sing, “Only human hate could give us something so unforgiving.” What inspired that lyric?

The thing that I’m most proud of with this song is that it works on a variety of different levels. So with that disclaimer, I think it’s about the systems that we create for ourselves to help us make sense out of chaos. The system that I was thinking about when I was writing this song was monogamy, and the way that we structure our relationships around jealousy and possession and control, and how dark that is to that to a beautiful, expansive thing, either because of our jealousy or insecurity. However, if you want to read it through the prism of religion or f**king capitalism, you can. It’s broad enough that I feel like it can be used as a critique for human fallibility on any level you can think of, and how our intentions are so good but the world is always corrupted by our inherently flawed nature.

Are you coming out of writing this album feeling optimistic?

(Laughs) You know, if I’m being totally honest, I am not at all optimistic about the future. I don’t have a lot of hope, and I feel like a fatalist on many levels. I love people and I believe that people are capable of doing a lot of good. But I feel as though we have reached a point with our relationship with the world and each other where it’s just too big to control. The problems are based largely in scale. And I just don’t see any coming back from that that doesn’t involve widespread pain and death and chaos.

With that said, I don’t think that’s a particularly helpful sentiment to perpetuate. But it’s what I genuinely believe so I tend to try to keep my mouth shut and let people who are a little bit more optimistic lead the conversation because I think my, “We are doomed,” thing is not particularly helpful. So, no, I don’t particularly have a lot of hope for the future, unfortunately. But I hope I’m wrong! I mean, s**t, I would love to be wrong.

How do you feel you’re still growing as a band?

Well the most exciting that’s happened to us of late is that we actually started playing with a third person in our live shows, which is something we haven’t done before. This new record is very, very complex and layered, and it got to the point where our choices as a two-piece are not great: it’s either we change the nature of the songs fundamentally, which we didn’t want to do, or we play along to pre-recorded material, which we didn’t really want to do. So now we’re playing with a bass player, which is an absolute delight. And we always said that when the two-piece thing started feeling like a bad limitation instead of a good one, then it would be time to move on. So we finally hit that point, purely in a touring capacity.

A decade since your debut was released by Merge, how have your motivations changed?

Well, 10 years ago I was really young and I didn’t really know what awaited in the music industry, and in my life in general, and I wasn’t really thinking about it too much. But everything felt open and full of possibilities. Since I’ve been doing this for quite some time I’ve learned a lot about what aspects of the industry I find to be in line with my personality and beliefs, and which I really don’t, which is really healthy, because I feel like I understand what I’m shooting for, and I understand where I wanna exist. But at the same time there’s not this extensive expanse of possibilities, like there was when we were younger. With that said, you couldn’t pay me to go through those years again. There’s a laundry list of ways in which they were difficult, and I’m very happy to be through them and into my early 30s, a little bit more comfortable with who I am and what makes me a happy, healthy person.

Now I understand my ability to create is very fragile and very precious and that’s something I don’t want to lose, even if it means that we lose the ability to be “successful”. The most important thing to me is protecting my ability to feel good about myself in what I’m doing and to be creative, because it’s the thing that I care about most in the world. It’s really the only source of uncontaminated joy that I feel like there is for me. So now I try to do what’s right for my career but never to the detriment of that core priority of preserving my love for what I do.