Ranging from fragile piano ballads to sinister synth-pop – and tackling his experiences with depression and homophobic abuse head on – Mike Hadreas’ third album as Perfume Genius is a career high. Here he explains how he found the courage to confront his demons, and shares some of the inspirations behind Too Bright. 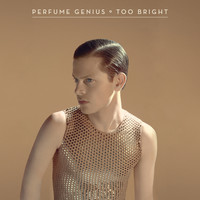 In the press release for Too Bright, they compare the artistic progression between this album and Put Your Back N 2 It to the leap Kate Bush made between Never For Ever and The Dreaming, and that Scott Walker made between Climate Of Hunter and Tilt. It’s a really interesting choice of artists. Are they influences of yours?

Yeah. I mean, I don’t know if I would ever have the balls to write that myself, but I’m definitely obsessed with them both. I don’t know if I’m knowledgeable enough to talk smartly about Scott Walker, but everything I’ve heard I really like. And I like that, whatever direction they go in, they go all the way.

Do you view Too Bright as an extreme a change in direction?

I think it’s helpful to talk about it like that now, but I didn’t think about it like that when I was writing. I knew that I was experimenting and letting loose a little more – and that it was different and a little wilder – but it still felt like myself. I guess the danger in writing about [the album] like that is that it sounds like I’m dismissing everything I’ve already made. But I still like my old music and that old way of writing, and there are still some songs on the new album that are close to that.

Writing Too Bright, I felt a mix of defiance and duty; a duty to write music that would be moving and empowering.

You refer to that “old way of writing”; how did the writing process differ for Too Bright?

On the first two albums, it was important for me to be patient and gentle with the things I was talking about, because a lot of the stories I was telling were things in my past that I still needed to figure out. And they weren’t always gentle or patient experiences, so it felt very therapeutic for me to take my time and see the big picture.

But these new songs are a lot more immediate, and about things that I’m thinking about right now. And even though the music’s still personal, I’m sort-of writing for people and at people more than I used to. Writing Too Bright, I felt a mix of defiance and duty; a duty to write music that would be moving and empowering.

I think I’ve just gained confidence, musically. I wanted to shake off whatever insecurities I have about how I think I’m supposed to work, or what I’m good at. You know, I thought I had a limited amount of things that I was good at musically and that I needed to stay in that zone, but then I decided to screw it all and just go for it. And even if [the album] ended up being sh*tty or silly, at least it was something as experimental and wild as I wanted it to be.

There’s definitely a feeling of defiance on ‘Queen’; a sense of you saying, “You can love me or hate me, but you can’t ignore me.” Can you tell us about the circumstances that inspired the song?

Well, I fall into a lot of the stereotypes about gay men and, equally, I don’t fit into others. I’m fairly feminine and I got a lot of sh*t for that growing up. It affected me. I felt ashamed of myself a lot; very self-conscious about how I was carrying myself, about how I talked, how I seemed to people... And for a long time I believed that I was not as much of a man as the people that were yelling at me. But I don’t feel like that anymore. And maybe I’m not as much of a “man” but I’m proud of that. I don’t really care about being a man; I just do whatever the hell I want! Also, those “feminine” qualities that some people pass off as weakness in me are actually the parts of me that I have found to be the most badass and brave.

I wanted to take all those stereotypes that I fall into and embody them in a defiant way, almost as a weapon. I think that song’s half me waving my finger at people, like, “If you want to pass me off that’s fine, because I’m coming for you and I’m not gonna change anything,” and it’s half me doing some confidence-building; shaking off that victimisation that I felt growing up, and that had me believing a lot of lies about myself.

Can you tell us more about ‘Grid’ too, please?

Well, ‘Grid’ is a very depressing song about how I can see the circular way that things are going in my life; how things are never going to be exactly where I want them to be, neither for myself nor for the world. That’s not how I always feel but... I don’t know, I guess depression to me is when I feel like things are pointless; there’s this void and everything feels futile... And it becomes like this circle, where I’m embarrassed of myself but then I’ll be embarrassed that I’m embarrassed of myself.

I guess that song was me trying to exorcise that feeling in a more purposeful way. So even though I’m plainly speaking all of those ideas, there’s this sense that if I sing them very powerfully – and get it all out – then maybe it will go away a little bit.

Your songs frequently deal with quite dark subject matter, but it’s usually tempered by a sense of hope...

...Especially on the first two albums – and at points on this one. But ‘Grid’ is the one song where I don’t really feel like I did that! (Laughs) But I guess there’s a kind of catharsis in it, which could be a source of hope.

The accompanying video is crazy. Whose concept was it?

Mainly mine. Even right after I made the song, I had this idea of this video with pulsating dancers around me. I wanted to be like David Bowie in ‘Labyrinth’, surrounded by all these goblins but very dismissive and kinda b*tchy about it. (Laughs) Like the song, [in the video] things are just sh*tty, and I give up thinking otherwise or trying to avoid it. I’m letting it happen.

After the problems with you had with YouTube banning the video for ‘Hood’, were they ok with this one?

Well, I didn’t hear anything! I don’t know if they’re happy about it, but they’re definitely not mad. I mean, it’d be different if a couple of dancers had their shirt off and we almost kissed or something – I’m sure then they would have an issue with it.

With ‘Hood’, [YouTube] really didn’t like that long embrace. And, for me, that video is even kinda cutesy. I don’t know if they thought maybe we were gonna go and have gay sex after the video was over and just the thought of that was not family friendly?!

Too Bright was produced by Adrian Utley of Portishead. How did he become involved?

Well, it was co-produced by Ali Chant, who was the engineer on my second album. He already had a working relationship with Adrian, and he thought Adrian would respond really well to my demos. I didn’t have to hear more than [Adrian’s] name to be really excited about it, but after writing him I knew he understood the emotional content of the songs as well. And I knew that, technically, he would be able to take me in the direction that I wanted to go, and be unafraid to make the disturbing sounds be really disturbing.

You can definitely hear elements of Portishead in the dark synths sounds. We were also reminded of PJ Harvey – both in the sparse guitar and wild dynamics of ‘My Body’, and in the title of ‘I’m A Mother’, which seems like a nod to her track ‘I Think I’m A Mother’. Was she an influence?

Oh, big time. I’m not even trying to hide it... (Laughs) Even though a lot of my new songs still have a pop element to them, there was a time when I was trying to write in a very different, more “pop” way for this album that was more universal. And then I thought about music that was really moving to me when I was growing up – not just music that I liked, but music that inspired me and that I was obsessed by – and she was one of the main people that I had that relationship with.

I had to stop and think whether I wanted to make music that was alright and would maybe be pleasant enough to get on a commercial or a TV show or something, or whether I wanted to try and make something that people would be really empowered by, like the music I loved growing up. So instead of worrying about making music for everyone, I tried to think about all the people who had written me letters – and that would need the music – and tried to write for them.

Is your audience always a consideration when you’re writing?

Yeah. I feel like, a lot of the time, when musicians decide they’re gonna be more experimental it’s almost at the expense of the people listening. Even though I was screeching and screaming, and doing things that were really exciting to me, I didn’t want the songs to be unlistenable or to just sound like noodling. Also, I just like it when songs are catchy.

Is there a track on the album that you have the strongest emotional connection to?

I like music that almost feels like a soundtrack: like when you listen to a song from a movie and you’re immediately sucked into the same mood as when you were in when you first saw that movie. ‘My Body’ is a song where, whenever I perform it, I immediately feel like I did when I wrote it; I feel this heavy mood. And I’m proud of that because it’s something that I feel is important.