Though best known for her work in Howling Bells, last year Juanita Stein launched her solo career with debut album America. A testament to her quick working pace, she's already back with album number two, and so we had a chat with her about working with Brandon Flowers, social media as a tool for artistic control, and the implications of being voted "Sexiest Woman In Rock" back in 2009... 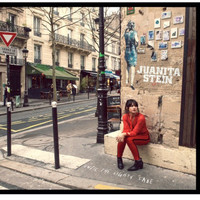 You worked with Brandon Flowers on your track, "Forgiver", while supporting the Killers on tour - what was it like working with him?

It was good! It was very quick - in and out. Everyone was busy, we were in the middle of the tour so there wasn't a lot of faffing about. Of course he's the ultimate professional, and it was really enjoyable - because I like to work quite quickly too. I don't like labouring over things for days at a time.

One thing that makes it clear how much you like working quickly is how this is your second solo album, but your first one was only last year.

(Laughs) Yeah, I'm not kidding. I think without the kind of democratic unit of Howling Bells it's easier to make decisions for yourself and just kind of lunge forward and do what you feel is the right thing. I had a whole bunch of new songs waiting and Stuart Sikes had a studio that was free, and so I went up to Austin and recorded it.

When is Mojo gonna stop putting f*cking Neil Young and Jimi Hendrix on the cover?

Um, I don't really feel the need to close it verbally. We're just not playing and that's it, really.

In general, what has the transition to becoming a solo artist been like?

For where I'm at right now in my life it feels like the perfect thing to be doing, so I've been enjoying it a great deal - rather than going against the tide, which is something that we do in life sometimes. You feel like you're sometimes really going against what you're instinctive self is telling you to do, so this just feels like the right thing to be doing. I really enjoy the freedom of it.

The first solo album was about America, and you've said before that this album was almost the second half to that record?

It feels like a continuation in the sense that the first album was very dreamy and conceptual about this grand cultural influence that America has had on me growing up. And I'm still taking that influence, but I suppose what's happened between recording that first record and the second is that I've road-tested the songs a lot more, so they've kind of gained some traction. With that traction I've kind of applied that to the new songs and the new record, so it's kind of gone up a notch. Musically it's a bit less symbolic and more factual, I guess. It's based on characters and people and their situations.

Is that still with relation to America, or more generally what you're encountering?

I think generally what I'm encountering, and also having toured in the States - which is not something Howling Bells ever really did. We did one tour in America and that was it. We just never got there, so for me it was really enlightening going over and playing South By Southwest for the first time, and getting a different feel. So the music takes on a different personality.

To us, your music has always had a kind of country, Americana tinge to it - so it's interesting that you weren't touring around the States as Howling Bells.

I think the fact that we moved from Australia to London kind of set up in a way as a kind of quasi-British band for a while. And we connected really well with England and Europe, and so it was easiest at the time... This was before the onslaught of social media, so there wasn't as much of a connection as there is now. You weren't so aware back then of who was indulging you or listening to your music. It's a very different landscape now.

How do you feel about the expectation to be on social media?

I actually really appreciate it, and I feel like in 2018 the artist is far more in control of their content than I was ten years ago even, where you had record labels that were still very much at the helm and were very comfortable being in control of the artist. It's very much expected that you as the artist are taking control, and posting photos on Instagram all the time and going live with videos and all these things that record labels traditionally did for the band. I prefer it a hell of a lot more this way.

Even beyond social media, the way the industry works has changed so much since you started out - streaming is the main way that people consume music. In terms of breaking through as a solo artist, how have you found that?

Streaming is not difficult - if someone wants to listen to you for free then they'll do it. I've had more success on streaming platforms as a solo artist than with Howling Bells. But selling records is a different story. I really feel like unless you're Ed Sheeran or Adele you're not shifting enough units to support yourself as an artist. So our job is to go out there and speak to people and hold their hands - literally, in person - and that's the only way we can make a connection and make a living. It's playing live and selling merch. It's just what comes with the territory now.

We were on your Wikipedia earlier, and back in 2009 you were voted as 'The Sexiest Woman in Rock'.

That it was deemed appropriate to have an award like that less than ten years ago feels quite damning, but obviously things are changing...

I'm a woman who has been in the industry for a long time, so I have noticed a shift. I think the predominant shift happens to be that we're a lot more comfortable having the conversations now, and I think that's been the most crucial shift in the political landscape. So we are okay to say all these things out loud, whereas ten years ago...I mean, what a ridiculous thing to do! To rate women in terms of their aesthetic, and deem that there is an importance attached to that... I think the only places comfortably doing that kind of thing now would be straight-up men's magazines. I think we've made a pretty epic shift in the forefront of the music industry, in that the voices are being heard, and we weren't being heard before.

Having said that, you still go to any WHSmith in the country and literally every single cover of every music magazine is a male artist. I remember doing an Instagram post at the airport a while ago because I just couldn't find a woman anywhere, on any music magazine cover. When is that gonna shift? Like when is Mojo gonna stop putting f*cking Neil Young and Jimi Hendrix on the cover? Even if they put Stevie Nicks on every month it would be an improvement. There's still a long way to go, but we're turning a corner - slightly.

In 2017 and 2018 there's been a shift where people expect artists to be saying something, to be politically engaged.

I've never felt that expectation. I have that expectation of myself, but I never feel that from a societal perspective. But I'm very moved by people's situations, and a lot of the songs on this record are directly a result of feeling frustrated and helpless for so many people. There's an exodus going on from various parts of the world and there's all these displaced humans just turning up everywhere and it riles me. I might not say the words exactly, but I'm very fuelled by the disruption that's going on.

Yeah I mean, it took f*cking Harvey Weinstein to create a movement, essentially. In a sense, these towering figures of oppression are emerging, and they're so disruptive and so offensive that it's taking these figures to kind of push us. It's healthy and necessary in a way, and I'm enjoying that part of the political landscape - that we're getting off our arses and really doing something.

Is there anything else you would like to say about the album?

It all happened so quickly, because I feel like there's so much that I need to say, and I want to say it now, not in a year. I just feel very passionate about it and very ready to present it to the world. I don't like harbouring the material - I'm to get it out there and have people respond to it. Basically the sooner people have the record, the sooner they can connect with it. I'm ready to get it out there.