From the same thriving South London scene as Shame and Sorry, Rough Trade signees Goat Girl specialize in setting tales of society’s grimy underbelly to warped, country-tinged post-punk. We caught up with drummer Rosy to find out more about the band’s roots, and heard how Chris Morris and creepy men helped inspire their excellent, self-titled debut. 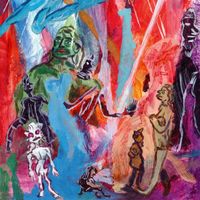 Can we talk about the band’s beginnings? Had you all been making music prior to Goat Girl?

Yeah, I was in a band before Goat Girl, but we’d all been making our own music separately. I joined [the band] last, about three years ago, and the rest of the band had all wanted to be the singer and nobody would play bass, so in the middle of songs they’d all swap instruments. They went through a few different drummers and then I came along.

There was a band I was in at the time but it wasn’t really going anywhere, because we were half trying to do our own music but also doing loads of covers. And then I met [Goat Girl] at The Windmill [in Brixton, South London] and they said that they needed a drummer. I was in a time of my life where I decided I was gonna start saying yes to everything, so I was just like, “Yeah, why not?”

Yeah, we’re all quite similar in that we’re quite chilled out and we have the same political views. We all share a love that warped-country sound as well, and an interest in satire and irony.

We never have a game plan; it’s just us doing what we think will be best.

As you mentioned, you have really strong links with The Windmill pub in Brixton. How vital has that venue been in shaping the band?

It’s important for us, not just because it’s where I joined the band – before that I’d been going to gigs there and they had as well, and we crossed paths. When I joined the band, we thought it would be so good to get a gig at The Windmill because we’d watched all our favorite bands there, and when we did get a gig there we were very excited about it. We’ve been playing there quite a lot ever since, and having the freedom to play live there and have all your friends around you has definitely shaped us quite a lot. It’s a very friendly environment.

The South London scene does seem very supportive. We spoke to Shame earlier in the year and they were singing your praises.

That’s why it’s kind-of weird to call it a scene because there’s not one genre, it’s just everyone making music that they like, but releasing it on the same platform in an equal way. Nobody feels superior to anyone. Like, I really love Meatraffle and used to go to loads of their gigs, and then when we started playing we asked them to support us. There’s this mutual appreciation between bands.

You guys have gotten off to a flying start, signing with Rough Trade. Has being with a prestige indie label added any pressure?

I guess it does add a bit of a pressure because a lot of the time that’s what we’re referred to as, like, “Rough Trade signings...” People use it as shorthand as what to expect from the music. But we’re so chuffed. We didn’t really expect it; we were just making music for the love of it. And when the whole thing happened it was quite surreal but amazing.

How are you feeling ahead of the release of your debut album?

I just want it to come out now! I’m really proud of it; all the hard work’s paid off. And I’m excited for people to listen to it because I think it puts us in a different light to what people have seen of us so far.

Were you setting out to surprise people?

The thing with us is we never have a game plan; it’s just us doing what we think will be best. We wanted to make this album like an actual album, not just a collection of ideas. So we thought a lot about the order, and we would practice it from the first song to the last song, and we’d work out how one song could flow into another, and have this live feel. And then we added these quite weird interludes in.

What attracted you to work with the producer Dan Carey?

Well, we saw him play at a gig that we were playing as well, and he really liked our show. Then our single “Crow Cries” needed to be remixed because it wasn’t quite full enough, so we went down to his studio and met him, and he beefed the song up and it just sounded so much better. When we met him we hit it off straight away. We just knew that he had the same vision that we had in the way we wanted the album to sound. But also we could take things to a new level because he’s such an amazing producer and if he felt something would be good for the music he would push you, but not in an aggressive way.

I learned that recording doesn’t have to be monotonous; it can be more of a fun experience. We didn’t mind making mistakes and didn’t attempt to make everything perfect. It was about getting the takes that felt the best or had the most energy.

When did you work on the album?

It was last summer, actually. We did it over two weeks and we’ve been sitting on it for ages. I’ve just been trying to not listen to it until it comes out, so it can have that same feeling. Because I find that, naturally, I just listen to drums and I can hear myself making mistakes, and I’m just like, “Arghhhh! Just slow down!” But then if I try and remove myself from it and listen to it as a whole then I can listen to it and enjoy it.

What lyrical preoccupations do you see running through the album?

We see it as tracing a day. You wake up to this big smack in the face, go on this little journey, and then the ending is at the pub, followed by the birds chirping the next morning. Lottie [lead vocals] has created these characters that the stories are focused on, and they’re told looking through the eyes of a child or an alien; someone who doesn’t really know what’s going on, so they’re describing events it in a really simple way. We don’t really take ourselves very seriously and obviously the lyrics are very satirical in their way.

Did we spot a ‘Brass Eye’ reference in “Burn The Stake”?

Yeah, yeah, paedogeddon! Nobody’s noticed that yet! I love ‘Brass Eye’. I love anything Chris Morris does, really. We’re very inspired by Chris Morris and Charlie Brooker, and comedians like Bill Hicks and Stewart Lee.

One song that really stood out to us is “Creep”, which outlines this really seedy character. Is the story based on real-life experiences?

Yeah... I mean it’s happened to everyone really, hasn’t it? Well, most women have had experiences like that: you’ll just be going about your day and then there’s someone making you feel uncomfortable or wolf-whistling. It’s about the things that women have to deal with.

In the video for “The Man” you recreate Beatlemania-style adoration, but from male fans. Did you come up with the concept?

No, it was the director’s idea. I was a bit apprehensive about the idea at first because it could come across badly, or people wouldn’t get it: seeing us being chased by loads of men might be a bit weird. But I think it came off really well and you can obviously tell that it’s not meant to be serious.

It was just very interesting to flip the whole fanatic side of things. You know, these men are hysterical, which is something you don’t really see ever. Some of our friends star in it, and we were asking them how it was screaming and screaming, and they were like, “Yeah, it was really therapeutic actually.” Men don’t often get a chance to behave that way, I guess.

What do you think you’ve learned in the making of this record?

I think I learned that we are actually quite good. (Laughs) Before, we never really understood why people were listening to us, but I think making this record I realized it’s a really special record. I don’t really know many other first albums like this.