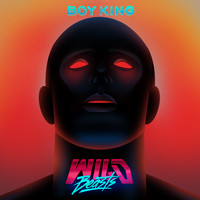 When we interviewed you around the release of your last LP, you said, “This record stepped out of the ruins of Smother, chest puffed out, like the hero appearing from beneath the rubble.” By extension, what is Boy King to Present Tense?

Hayden Thorpe: It’s the villain. It’s like the superhero became the villain. Maybe he took some kind of potion... It’s definitely a kind of villain record anyway.

We read that Boy King marks a return to you being “p*ssed off,” but you sounded quite p*ssed off on Present Tense at times.

Tom Fleming: (Laughs) Well, that’s good. I was very wary of music for comfort or to console. I always think you should introduce some aspect of yourself that you try to suppress, and I definitely think this record is about the failure to suppress things. The uglier side of us, or situations, is being celebrated and brought very much to the fore.

Boy King is supposed to be an 18+, rather than a PG production, but the overarching theme is just to f***ing party and revel in the darkness.

The album was recorded in Texas. Did the surrounding political climate have any impact at all?

HT: I think so, yeah, but also we’re trying to emphasise it’s a party record, a hedonistic record. People come to us and want quite heavy explanations...

TF: ...As if we make records exclusively for context, and then we reverse all our musical ideas into that, whereas it’s the other way round.

HT: There is a heaviness and an adultness. Boy King is supposed to be an 18+, rather than a PG production, but the overarching theme is just to f***ing party and revel in the darkness. The political narrative of it is woven in because of who we are and what we’re living, rather than it being a fist-clenching statement.

TF: I remember reading about the geopolitical consequences of the situation in Syria, and then just going to Texas and being in the middle of a big continent where people were telling me they didn’t really believe in climate change. And Donald Trump ascended to the Republican candidacy while we were out there. It was like, “Wow. Forgive the pun but, we’re not in Kansas anymore.” So that feeling of being out of place was a really influential one I think.

HT: It’s a good point. It became obvious that Trump was gonna be the candidate, and I guess your response to that is either to be crushed and whimper, or think let’s make this voice as Technicolor and brilliant as possible to make him look grey by default. I guess it’s important not to be self-conscious about these things because, f**k knows, Trump isn’t, and the Right isn’t.

TF: It’s funny in terms of the title of the record. Trump is totally a boy king: he’s totally like a Nero figure, playing out juvenile fantasies until suddenly he’s in power and he can do what the f**k he likes. That’s what the record is kind-of about: putting on a display of manhood to mask a smallness and an emptiness.

As a lyricist, you’ve always been fascinated by the carnal side of love, but the imagery on Boy King is a lot more blatant in that respect. What’s the rationale behind that?

HT: It’s less self-conscious. I also think it’s a product of the fact that sex in society now is blatant and all guns blazing, If I can say things in a more crude and simplistic way, then of course I’m going to hijack that. Also, it’s empowering and fun to be that guy, like, how dare I? It’s almost nauseating. And after five records you have to come up with a new methodology to justify why the f**k you’re still doing it, and one of those methodologies was to embrace all those things we may have previously fought against. It’s only recently that I’ve realised we’ve actually become the band that we were actually responding against as kids. We’ve become those guys.

Who are “those guys”?

On ‘Tough Guy’ you address the idea of “manning up” and performative masculinity. Is the song intended as a commentary on societal pressures on men?

HT: It’s a personal record and I guess we get asked a lot about masculinity. We have things to say about it, but we have things to say about ourselves, and we only have license to speak about hetero men being hetero men. In terms of that “suck it up” mentality, it is taboo to speak about male emotion. It just is. There is not a vehicle with which men are encouraged to express their sense of inability or fragility, and yeah, you suck it up and deal with it internally. That kind of stoicism is the defining atmosphere of the culture we’ve grown up in. As I’ve grown older, I’ve understood that however big all these huge male gestures are, it’s only covering up the size of the crack.

Boy King has a more arid sound than previous records. Do you think you absorbed that from your surroundings?

HT: Absolutely. I mean, Texas is a city built out of the desert. It’s beautiful, almost pastiche, 80s America to look at: it’s just so silver and shiny and big, and I think that kind of environment really affected the record. You feel small there, but to feel small and irrelevant is a good starting point for making a record.

TF: It’s probably a cliché but I think we did feel an unbuttoning in Texas. Like, we were taking off the uptight, intellectual, European persona – especially the shy Brit – and engaging with it. We needed to have a bit of swagger, a bit of performance to get anywhere, and [Boy King-producer] John Congleton did a good job of helping us by pushing our buttons a little bit, like, “Come on man, come on – leave that in. What are you worried about?”

HT: I remember John asked me very specifically, “Are you insecure about that?” And I was like, “F**k, that’s crushing, John.”

Why did you choose to work with John Congleton?

HT: We’d met about a dozen producers, and John always just said the most simple and profound things, normally about following your gut and your heart and being open-minded. It’s a given that he’s a sonic genius, it was more the psychological effect he had upon us which I think really galvanised us.

TF: Because he’s made a lot of music himself, and he’s recorded with a lot of artists, he’s very good at talking about music, and the feeling and process of making it.

You mentioned Prince was a reference point for this record. What else were you listening to or aspiring to?

HT: Nine Inch Nails had a huge impact on the record.

HT: The Downward Spiral. Yeah, it’s an important distinction. ‘A Warm Place’ specifically, blew my mind. I realised it was made in ‘94 and it sounds post-Burial. It reminded me of the force of that heavy music and the emotional affect it has on you.

TF: It’s funny because in our teenage years metal was in the charts. It’s impossible to think about now. We can pontificate about post-dubstep music all we want but it’s like, f**k it, guitar solo. There was a certain feeling of unburdening yourself of all the journalistic intellectualism, and reacting as musicians. It was very much a reactive record as opposed to something that was built to design.

HT: Made by people whose youth was spent sitting in their bedroom learning the shred solo, because you wouldn’t have done it if you didn’t have it in your closet. It’s not like we could naturally do this; we spent our teenage years...

TF: Learning modes and sh*t, yeah. (Laughs) I find it very hard to listen to new music when we’re making a record. My respite from that was to go and listen to these polished metal albums – things like Van Halen and Def Leppard – and that probably did bleed into the record. There was an element of recontextualising those things.

HT: We know the joke is on us. We’re the guys in the rock band, the Limey guys in America. So we were trying to reclaim that joke, I guess.

We also read that for Boy King there was a newfound creative fiction between the two of you.

HT: Newfound? (Laughs) It’s adult now, I think that’s the difference. We’ve been in the band for 15 years and we’re still learning each other and getting to know each other’s niches and tricks. The way any long-term relationship stays vibrant and alive and vivid is if you are still discovering that person. Also, profound and preposterous things happen to us in our daily lives, and you don’t know how each other is going to respond. But I suppose, creatively, we are all competitors as well as team mates.

It’s interesting that you’re still learning things about each other. Have you learned anything about yourselves specifically in the making of this album?

HT: Absolutely. I mean, there are quite a few songs on this record where it’s definitely an act first, think later scenario. I’ve spoken to quite a few songwriters about this, and sometimes you make a song and then it reveals something about you that has changed your opinion on yourself, or people around you, in a way that has a dramatic effect on your life. And I think there are a few songs like that [on Boy King].

How have your motivations and ambitions changed in that time?

TF: I’m not sure they have.

HT: We’re terrible careerists. (Laughs) We – and not by design – have always got it horribly wrong as to what’s in fashion. And I’m as nauseous and terrified about the response to this record as I was about the first. The sensation of doing the ‘Get My Bang’ video was almost identical to the sensation of playing our first show. I was like, “F**k, I thought I’d grown out of feeling like this.” And then you realise, no, this means you are doing your job because you’re holding your nerve doing things that don’t feel good in the every day. I came back from the ‘Get My Bang’ shoot and had a meltdown for a week. Just like, “What the f**k have I inflicted upon myself and the world? I feel so exposed.” But that’s the job.

TF: The job is to have the front to stand up and do something. You have to believe it’s good.